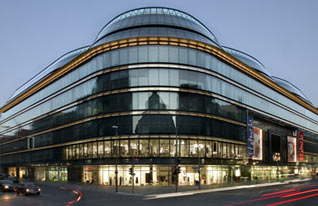 Galeries Lafayette opened 1996 their department store in Berlin. The French group, specialist in retail, had very early in mind, after reunification, the project to open a first subsidiary in Germany. The store is located in the Friedrichstraße, a commercial street of the center “Mitte” of Berlin at the corner of the Französische Straße.

The French architect Jean Nouvel built specifically for Galeries Lafayette a modern temple of glass, whose interior is centered around a huge cone, like a contemporary tribute to the famous dome of the Boulevard Haussmann department store in Paris. A part of the façade also features a vertical garden from the artist Patrick Blanc, giving thanks to the plants on the wall, greenery and nature in the street.

The Galeries Lafayette offer on 4 floors and nearly 9,000 m² a wide and exclusive range of products among the greatest French and international brands. Lafayette Gourmet, located in the basement of the store, offers many French culinary specialties to take away or eat on site, in one of the restaurants. Lafayette Livre proposes, exclusively in French, a large selection of new books and classic literature. 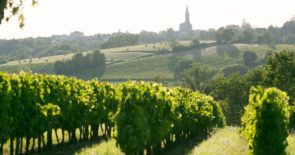 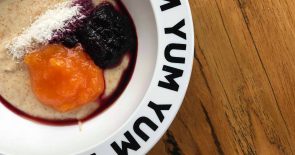